Главная
Отзывы
IT audit and IT service for Christian Dior Couture

IT audit and IT service for Christian Dior Couture 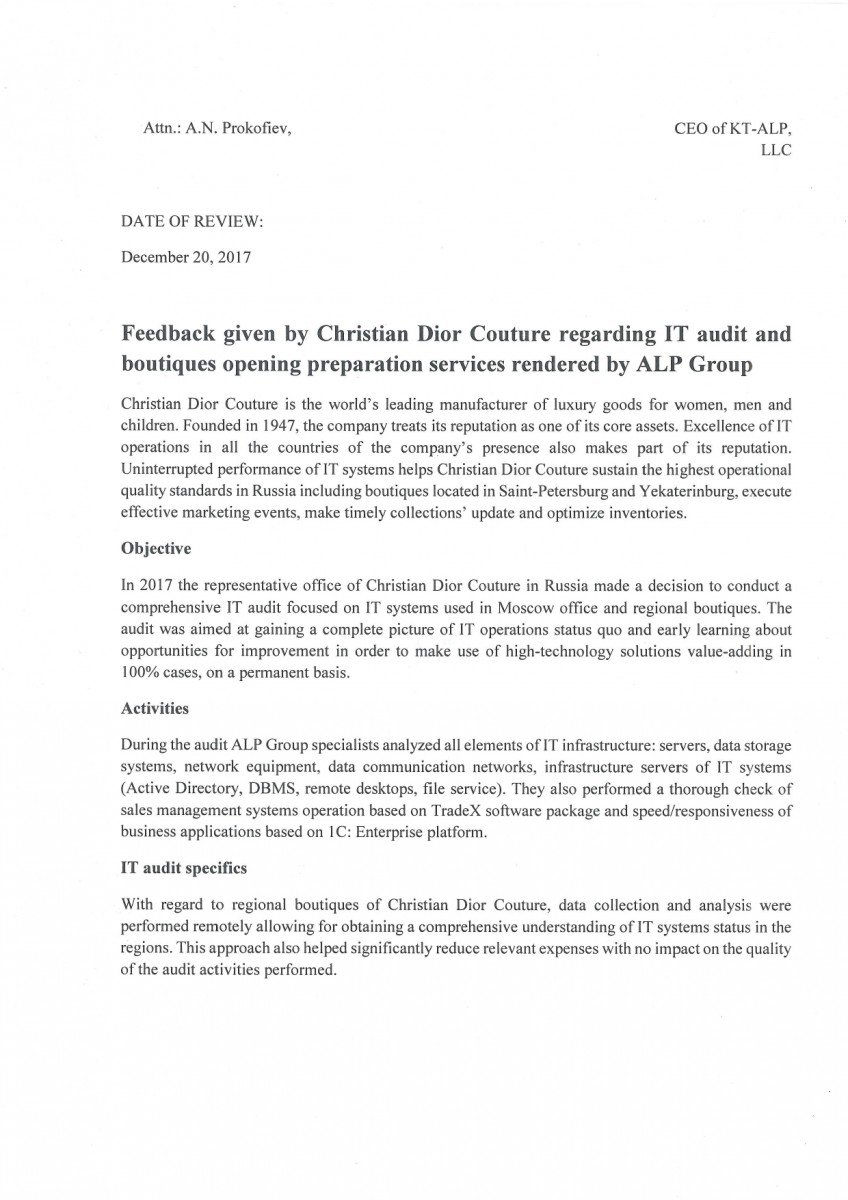 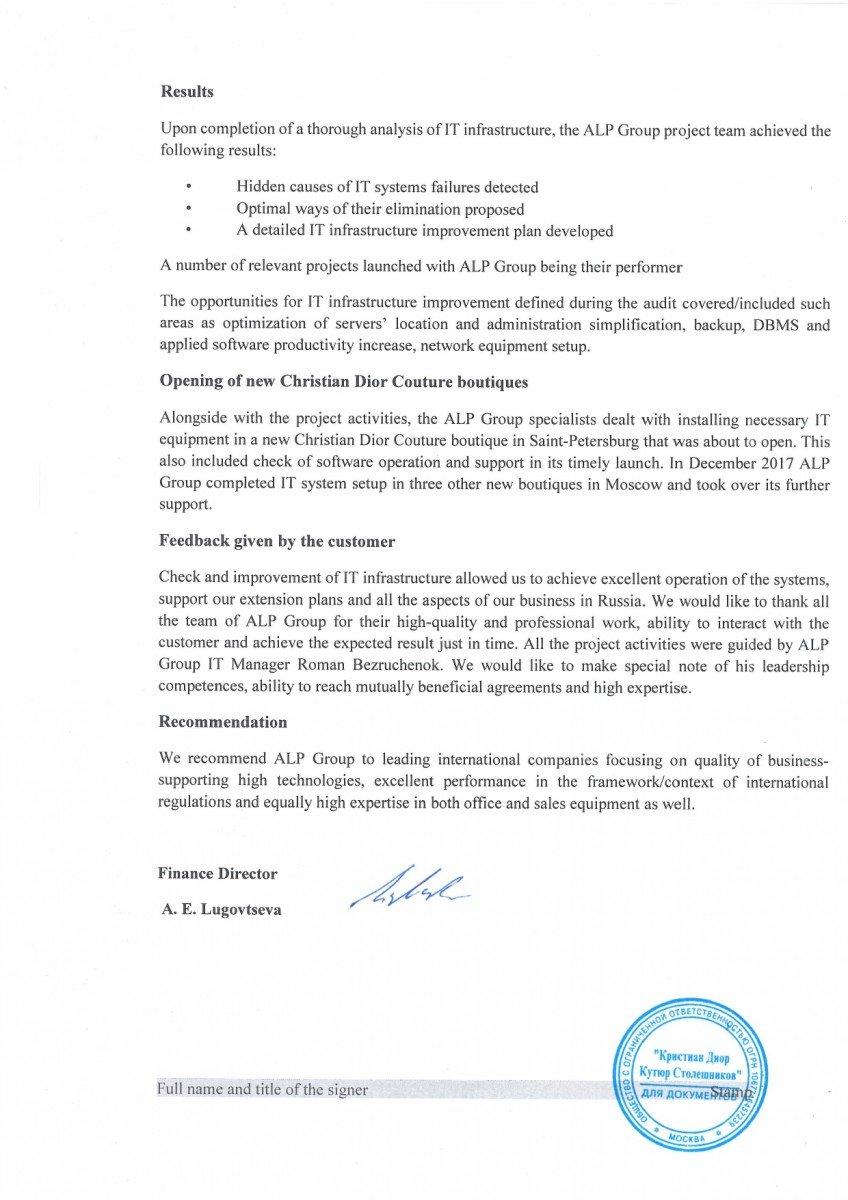 Christian Dior Couture is the world’s leading manufacturer of luxury goods for women, men and children. Founded in 1947, the company treats its reputation as one of its core assets. Excellence of IT operations in all the countries of the company’s presence also makes part of its reputation. Uninterrupted performance of IT systems helps Christian Dior Couture sustain the highest operational quality standards in Russia including boutiques located in Saint-Petersburg and Yekaterinburg, execute effective marketing events, make timely collections’ update and optimize inventories.

Objective
In 2017 the representative office of Christian Dior Couture in Russia made a decision to conduct a comprehensive IT audit focused on IT systems used in Moscow office and regional boutiques. The audit was aimed at gaining a complete picture of IT operations status quo and early learning about opportunities for improvement in order to make use of high-technology solutions value-adding in 100% cases, on a permanent basis.

IT audit specifics
With regard to regional boutiques of Christian Dior Couture, data collection and analysis were performed remotely allowing for obtaining a comprehensive understanding of IT systems status in the regions. This approach also helped significantly reduce relevant expenses with no impact on the quality of the audit activities performed.

Results
Upon completion of a thorough analysis of IT infrastructure, the ALP Group project team achieved the following results:

A number of relevant projects launched with ALP Group being their performer
The opportunities for IT infrastructure improvement defined during the audit covered/included such areas as optimization of servers’ location and administration simplification, backup, DBMS and applied software productivity increase, network equipment setup.

Opening of new Christian Dior Couture boutiques
Alongside with the project activities, the ALP Group specialists dealt with installing necessary IT equipment in a new Christian Dior Couture boutique in Saint-Petersburg that was about to open. This also included check of software operation and support in its timely launch. In December 2017 ALP Group completed IT system setup in three other new boutiques in Moscow and took over its further support.

Feedback given by the customer
Check and improvement of IT infrastructure allowed us to achieve excellent operation of the systems, support our extension plans and all the aspects of our business in Russia. We would like to thank all the team of ALP Group for their high-quality and professional work, ability to interact with the customer and achieve the expected result just in time. All the project activities were guided by ALP Group IT Manager Roman Bezruchenok. We would like to make special note of his leadership competences, ability to reach mutually beneficial agreements and high expertise.

Recommendation
We recommend ALP Group to leading international companies focusing on quality of business-supporting high technologies, excellent performance in the framework/context of international regulations and equally high expertise in both office and sales equipment as well. 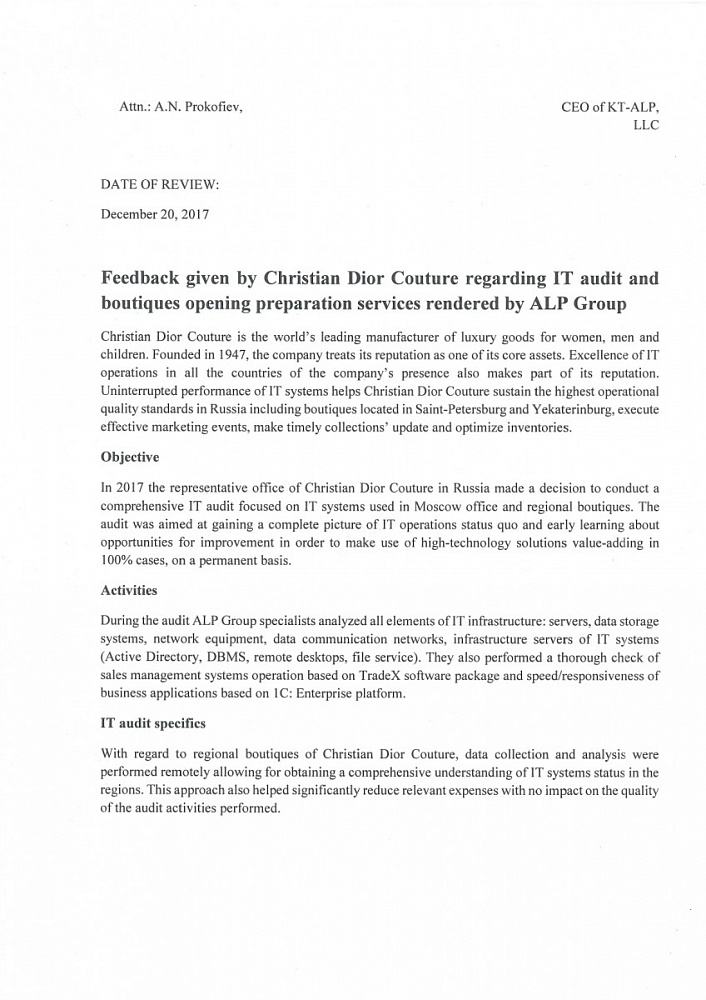 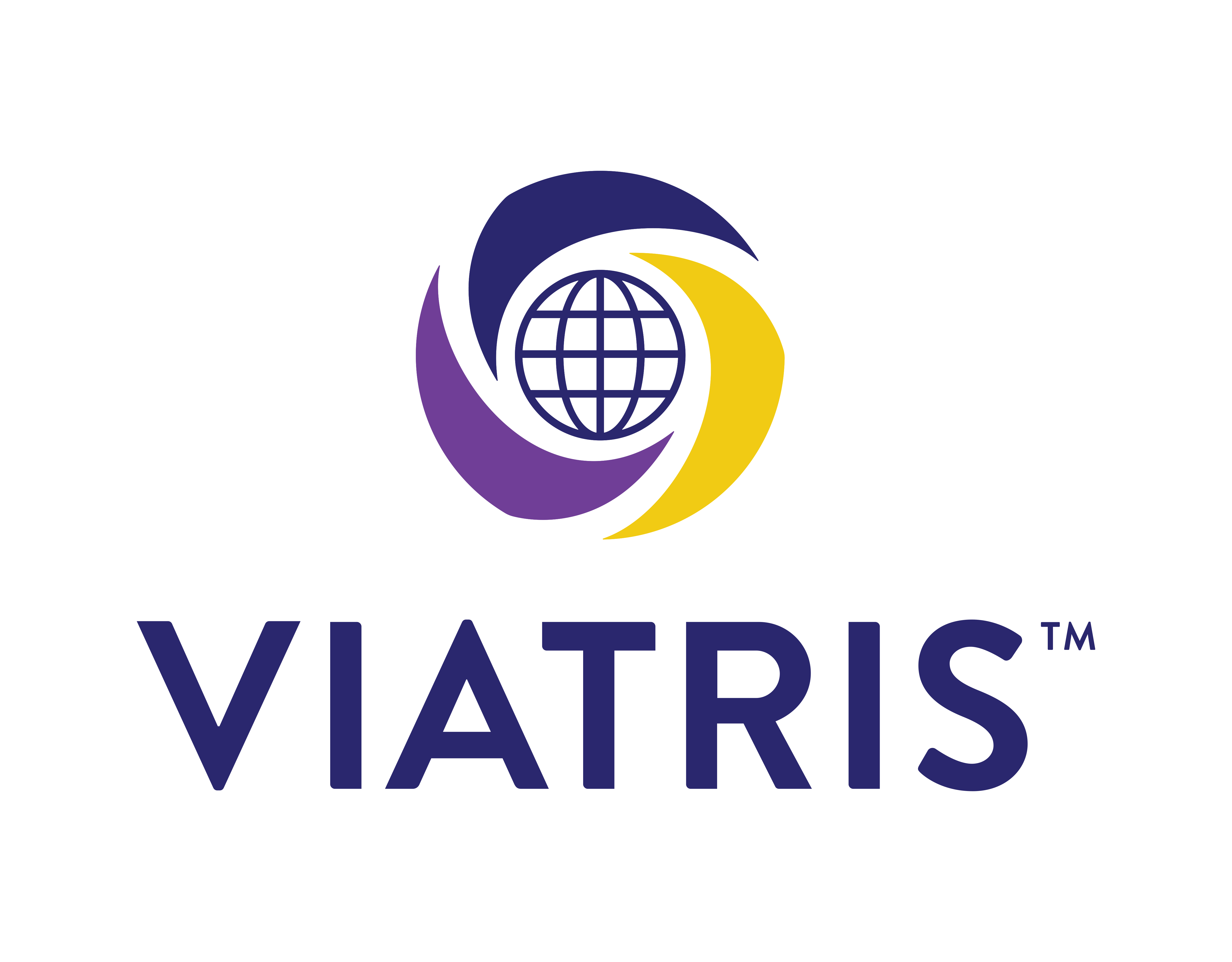